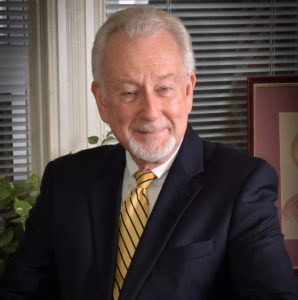 Laurent “Larry” Metzler is an educator with The Financial Education Partnership, one of the largest and fastest growing 501(c)(3) non-profits in the country.

He came to the practice of law after extensive experience as a financial counselor and as a Vice President in the financial and investment planning division of the trust department at a large, well-known corporation. In this role, he was responsible for creating and implementing personally tailored financial, tax and estate plans for senior-level executives from such companies as Aramark, Dupont, Smith Kline Beckman, Tasty Baking Company, The Sun Company, United Air Lines, and Cigna.

After leaving the institutional banking environment, he founded his financial planning, investment and insurance advisory firm. Shortly thereafter, he opened his law practice.

Although he has been practicing law for over thirty-three years and financial planning for over forty years, he was not fully satisfied with the “traditional” approach to estate and financial planning. He always felt that something was missing. Essentially, he wanted to serve as an ongoing trusted advisor for life. It was that perspective that led him to not only protect his clients and their families over the short-term, but to also give them the long-term confidence that they will be able educate all their children, retire comfortably with little or no debt, and simultaneously build, preserve, protect and pass along not only their financial assets, but also their intellectual, spiritual, and familial wealth.

He is also a member of the International Association of Registered Financial Consultants, the New Jersey Bar Association, the Burlington County Bar Association, the National Association of College Financial Advisors, the College Planning Network, and the Society for Financial Awareness. He has written several articles on the topics of tax planning, investment planning, and estate planning. He has also appeared on WHYY and other local television and radio stations and has been a guest lecturer at numerous functions throughout the Greater Delaware Valley.

Other than his military service with the 380th Bomb Wing, 8th Air Force, SAC, Larry has lived his entire life in southern New Jersey.